In part 1 of this series, I named my favorite actors/actresses and my favorite film that each of them are in. In this part, I will lay out my general thoughts, how they have changed over the years, and introduce a website/social platform I have been using now for a couple of months.

When I was growing up, I wasn’t much of a movie buff. The only movies I was very passionate about was the Back to the Future trilogy. I used to be able to quote nearly every line.

As I entered college, I became more and more interested in classic films. One of the first list I worked through was the “100 Must-See Movies” list by The Art of Manliness.

I highly recommend anyone who has any interest in films start an account and start tracking what you watch. For me, this was as simple as finding some lists like the one above and working through it. I also found that finding different lists online helped me expand beyond certain genres and explore what was out there.

Probably one of the coolest tools I’ve found to track what I’ve been watching I only recently discovered. Letterboxd is like social media for film lovers. You can log your views, review, and follow others with similar interests. Now, obviously, some people may have privacy concerns and that’s OK.

This won’t be for everyone. I will say that for me, it was helpful to know that Letterboxd uses TMDB instead of IMDB, so you at least keep Amazon out of the loop.

Here is an image of what my dashboard looks like: 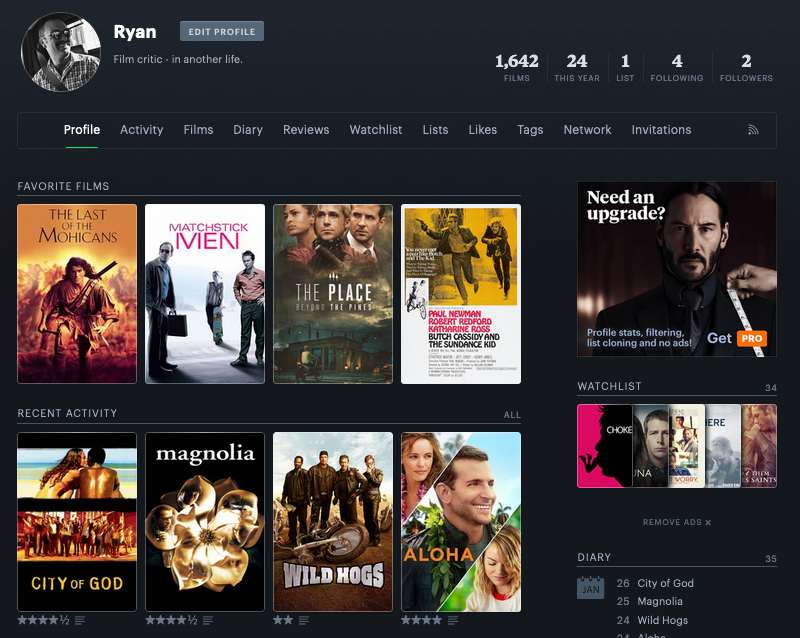 If you decide to start an account, I would highly recommend starting with an existing lengthy list of films, like this one. This made it really easy for me to go through and check off everything I have already seen. Once you do that, just log in every once in a while and log/review what you’ve watched.

I hope this was helpful and informative. Please reach out if you have any questions.

I don't have comments on this site because I don't feel like managing them.